Have you heard about the release of the FiiO M15? It’s the latest and greatest from the Chinese company, the first big thing in 2020. But what about their previous flagship? The M11 Pro is their TOTL of the last decade, and it surely won’t let its position being taken from its brother. Well, let’s compare the two, because they both can boast amazing specifications and performance. So, here are some of the many specifications of the two devices compared. Consider that the THX module of the FiiO M11 Pro is qualitatively better than the previous amping system of the M11, but the output power is actually lower. M15 is clearly more powerful, supporting a maximum output power of 800 mW, which is close to the 1000 mW capabilities of the XDUOO X05 Plus, which is a dedicated DAC/Amp!

The THX amps are basically high-quality premium amp's which are used in speaker setups, but including it in a DAP is just another thing. The Fiio M11 pro gives a clean and powerful sound output, it churns out much juice to power all your earphones and headphones with high power demands.

On the other hand in Fiio M15, the brand has implemented two high-precision, low-noise, low temperature drift OPA2122 op-amps for low pass filter, four OPA1612 for IV conversion procedure, and one OPA1622 for amplification on each channel. The output through the Fiio M15 is monstrous, you can power any of your devices, whether it be planar headphones with most power demands. The Fiio M15 will power them easily and make them shine with all the micro details reproduced perfectly.

But both while kept head to head looks quite premium with strong build quality. We have to say FiiO has been more on point with the detailed specifications of the M15, rather than the ones of the M11 Pro. We know MQA is supported on FiiO's native music app on M11 Pro, but still not on other applications; however, both devices are capable of full 8x MQA unfolding. Probably we'll know when future updates will bring MQA support on 3rd party apps - such as TIDAL, which is supported but can do MQA just with dedicated devices via USB. Fiio has promised that they will be updating the MQA with other players soon in the future firmware upgrades. 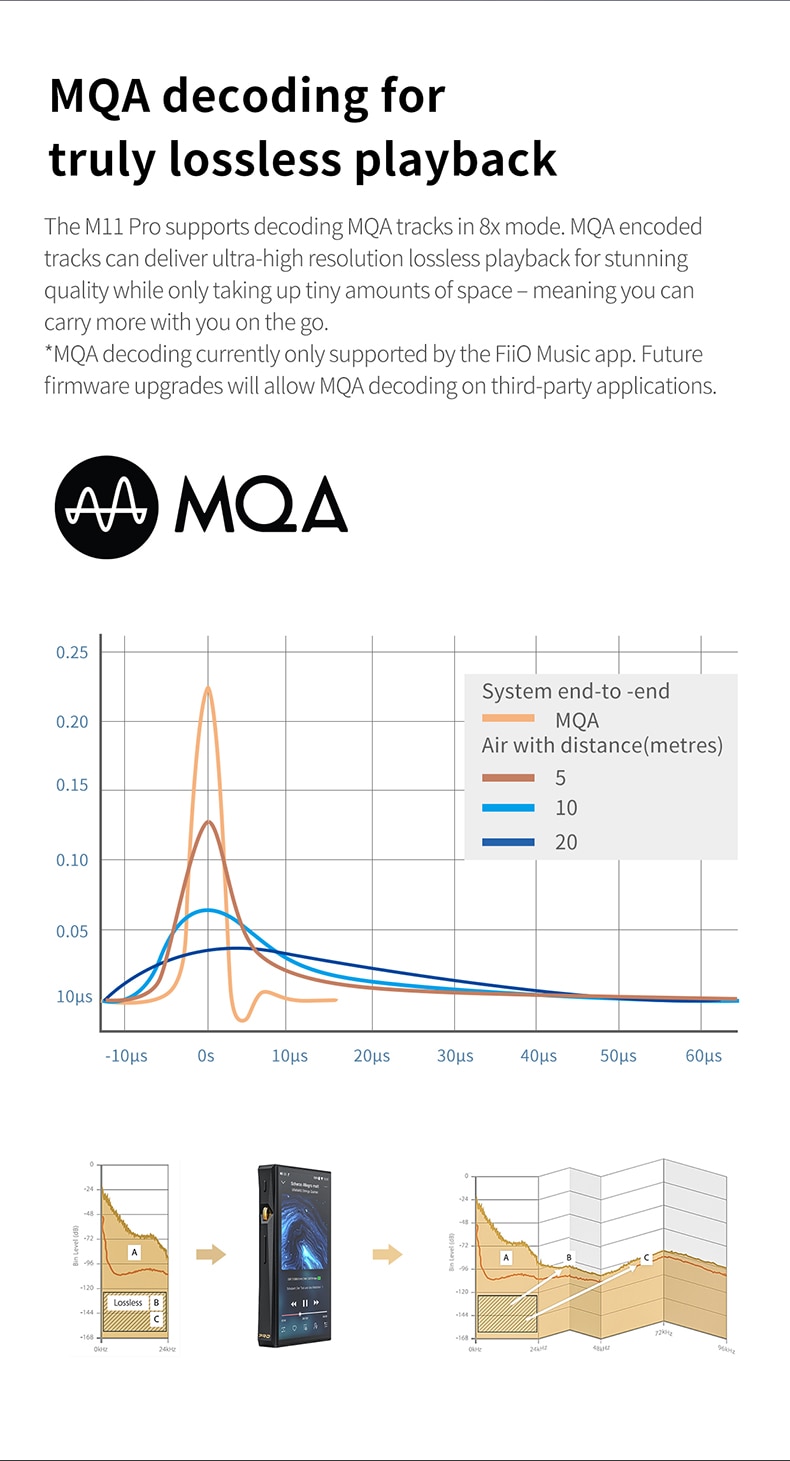 The screen of the M15 is the same 5.15 inches 2:1 720P unit as it is available on the M11 Pro, with the same resolution and aspect ratio. That's a smartphone-level unit, which pairs to the amazing System on Chip provided by Samsung which is an Exynos 7872. Being Android-based, the M series brothers by FiiO can run Android apps. There's an app store pre-installed, but you can sideload APK files if you have your favorite applications that are not available in FiiO's market app. It has all the apps you need for streaming, however: Amazon Music, TIDAL, Spotify, are just a few of the many streaming and offline services provided by the company, whitelisted out of the box.

Both the devices currently run Android 7, all the play store apps can be installed easily and used on the device.

Thanks to the 64 GB internal storage, expandable up to 2TB on both devices, these two audio players won't disappoint even the most pretentious users: there's support for every possible format, from MP3 to DSD (which has better support on M15 because it reaches DSD512). The 3GB RAM memory on board can help you run everyhting smoothly without killing necessary background processes.

There is something to consider when trying to choose between these two players: the configuration of buttons and outputs. In my opinion, the M11 Pro has better output positions, because the jack ports (3.5, 2,5, 4,4) are placed on the bottom of the device: if you carry it around, this avoids to badly fold your cables when you put the player in your pockets. However, I find the buttons way better on M15: there's a HOLD button like the good old Walkmans, a programmable button to assign functions to, as well as the classic music controls which are also present on the M11 Pro. The volume knob is different: on the M11 Pro is a classic M series vertical one, while on the M15 is more similar to an Amp volume control. And it's placed on the top, near the output jacks. The volume knob on the Fiio M15 has a circular light below the knob which gets brighter as you increase the volume and vice versa. Even though the M11 Pro sounds pretty good but the Fiio M15 just sounds excellent, it's just mesmerizing, the tonality of music through the M15 is so soothing and relaxing. I am not saying that the M11 pro sounds bad or something, it is great, it provides you a brighter sound output, with great details, the bass response has good extensions, the vocals and mids sounds natural, and the treble section has great detail retrieval. The M15 does all of these things but better, the staging through the M15 felt wider by a good margin as compared to the M11 pro. The details are crispier, the treble has longer extensions with a better, smoother response as compared to the M11 Pro. The sound output through the M15 has better resolution, micro details are reproduced just brilliantly.

And I have already told you the power difference, the M11 pro uses THX amps which are very good, to be honest, but in Fiio M15 there are 10 different OPAMPS working together and they provide just a monstrous power output, which is near to desktop DAC/AMP's power output.

So, what’s the best choice between the two? For now, we just know that the M15 is more powerful and has updated specifications, as well as a bigger battery. Both devices have a premium build quality. The Fiio M11 Pro sounds really good and outperforms other devices around its price range. The Fiio M15 does everything the M11 pro can do and the M15 do it even better, we are not saying that the M11 pro is not good, it is really amazing, but if you have a budget to go for M15 you can go eyes closed you won't be disappointed. The M11 Pro does things greatly, but the M15 does all of them even better, better imaging, better sound resolution, and better power output.

Stay tuned for more content about the FiiO line-up!

P.s. if you were waiting for some news about the M15 Pro, you’ll be sad to know that James Chung, CEO of FiiO, informed that they gave up on that project. More about that soon.

Lower frequency is set to 20 Hz. Does it make the deep bass worse than m11 pro?

Pity that USB does not “see” NTFS w orked once with my Samsung T5 but after firmware update it does not. Plays MP4 youtube Videos!!

Thrilled to bits with it, I have 7-8 Fiio players this is the best,DSF through Sennheisser 800’s
absolutely amazing

Pity that USB does not “see” NTFS w orked once with my Samsung T5 but after firmware update it does not. Plays MP4 youtube Videos!!

Thrilled to bits with it, I have 7-8 Fiio players this is the best,DSF through Sennheisser 800’s
absolutely amazing